Imagine a buddy asks you to write a program to detect a simple visual pattern in a video stream. They plan to print out the pattern, hang it on the wall in a gallery, then replace it digitally with artworks to see how they’ll look in the space. 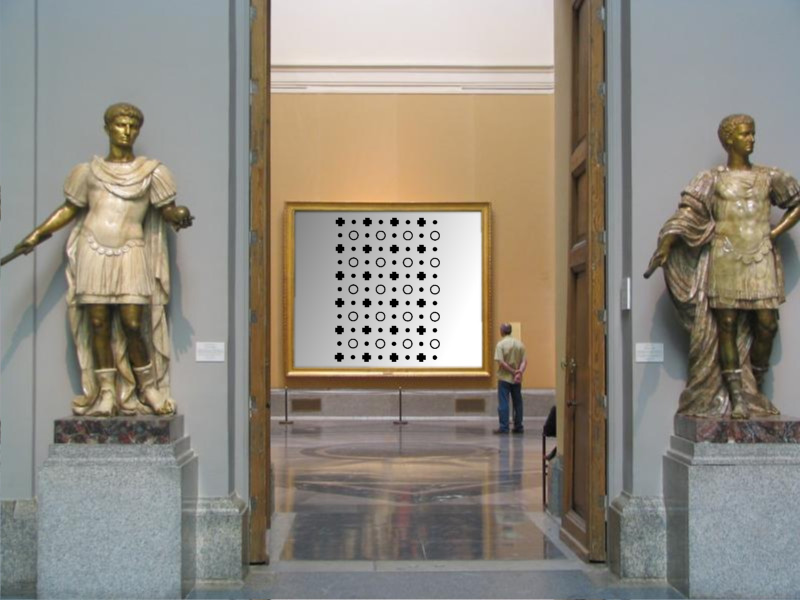 “Sure,” you say. This is a totally doable problem, since the pattern is so distinctive.

In classic computer vision, a young researcher’s mind would swiftly turn to edge detection, hough transforms, morphological operations and the like. You’d take a few example pictures, start coding something, tweak it, and eventually get something that works more or less on those pictures. Then you’d take a few more and realize it didn’t generalize very well. You’d agonize over the effects of bad lighting, occlusion, scale, perspective, and so on, until finally running out of time and just telling your buddy all the limitations of your detector. And sometimes that would be OK, sometimes not.

Things are different now. Here’s how I’d tackle this problem today, with convnets.

First question: can I get labelled data?

This means, can I get examples of inputs and the corresponding desired outputs? In large quantities? Convnets are thirsty for training data. If I can get enough examples, they stand a good shot at learning what I used to program, and better.

I can certainly take pictures and videos of me walking around putting this pattern in different places, but I’d have to label where the pattern is in each frame, which would be a pain. I might be able to do a dozen or so examples, but not thousands or millions. That’s not something I’d do for this alleged “buddy.” You’d have to pay me, and even then I’d just take your money and pay someone else to do it.

Can I write a program to generate examples of the pattern in different scenes? Sure, that is easy enough.

Relevance is the snag here. Say I write a quick program to “photoshop” the pattern in anywhere and everywhere over a large set of scenes. The distribution of such pictures will in general be sampled from a very different space to real pictures. So we’ll be teaching the network one thing in class and then giving it a final exam on something entirely different.

There are a few cases where this can work out anyway. If we can make the example space we select from varied enough that, along the dimensions relevant to the problem, the real distribution is contained within it, then we can win.

Sounds like a real stretch, but it’ll save hand-labelling data so let’s just go for it! For this problem, we might generate input/output pairs like this: 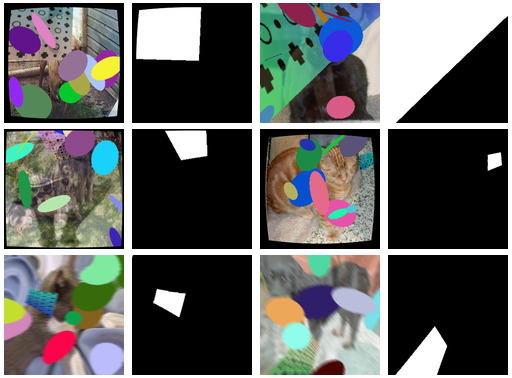 Here’s how these particular works of art were created:

The precise details aren’t important, the key is to leave nothing reliable except the pattern you want learned. To classic computer vision eyes, this all looks crazy. There’s occlusion! Sometimes the pattern is only partially in view! Sometimes its edges are all smeared out! Relax about that. Here’s a hacked together network that should be able to do this. Let’s assume we get images at 256x256 resolution for now.

Tada! We’re done. All we need now is to pick approximately 4 million parameters to realize all those filters. That’s just a call to model.fit or the equivalent in your favorite deep learning framework, and a very very long cup of coffee while training runs. In the end you get a network that can do this on freshly generated images it has never seen: 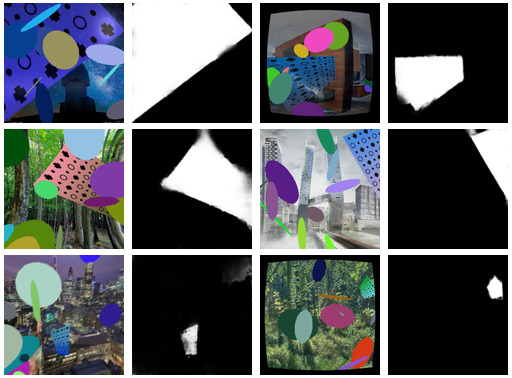 I switched to a different set of backgrounds for testing. Not perfect by any means, I didn’t spend much time tweaking, but already to classical eyes this is clearly a different kind of beast - no sweat about the pattern being out of view, partial occlusion also no biggie, etc.

Now the big question - does it generalize? Time to take some pictures of the pattern, first on my screen, and then a print-out when I finally walked all the way upstairs to dust off the printer and bring the pattern to life: 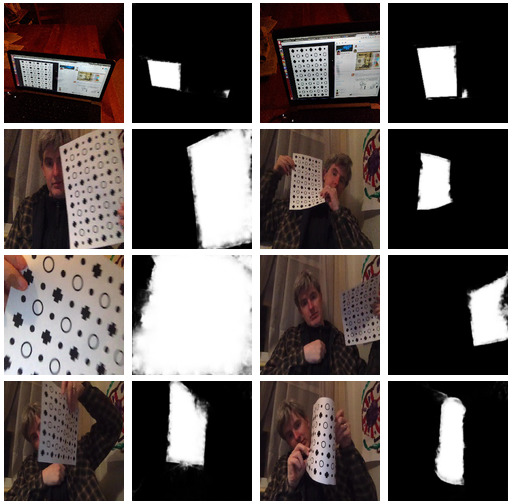 Yay! That’s way better than I’d have done by hand. Not perfect but pretty magical and definitely a handy tool! Easy to clean up to do the job at hand.

One very easy way to improve this a lot would be to work at higher resolutions than 256x256 :-)

There’s a somewhat cleaned up version of this code at github.com/paulfitz/segmenty