Many years ago, I had a list of hobby projects I worked on from time to time, each with a little summary that began: “Until Google solves this problem nicely, …” Most of these problems have now been solved, except this one:

I’d like to be able to communicate with aliens over great distances. Until Google solves this problem nicely, I’m working on a cosmic OS.

So Google hasn’t yet sorted this out, but Hans Freudenthal made a great start back in 1960 with Lincos, a “Language for Cosmic Intercourse.” Lincos starts out in a by-now conventional way (though it was inventing the conventions) with 35 pages describing a message for teaching basic math from first principles. Then it moves on to 12 pages on time. Then (and this is where things get very interesting) a whopping 79 pages on behavior, with imaginary conversations between imaginary personalities called Ha and Hb. 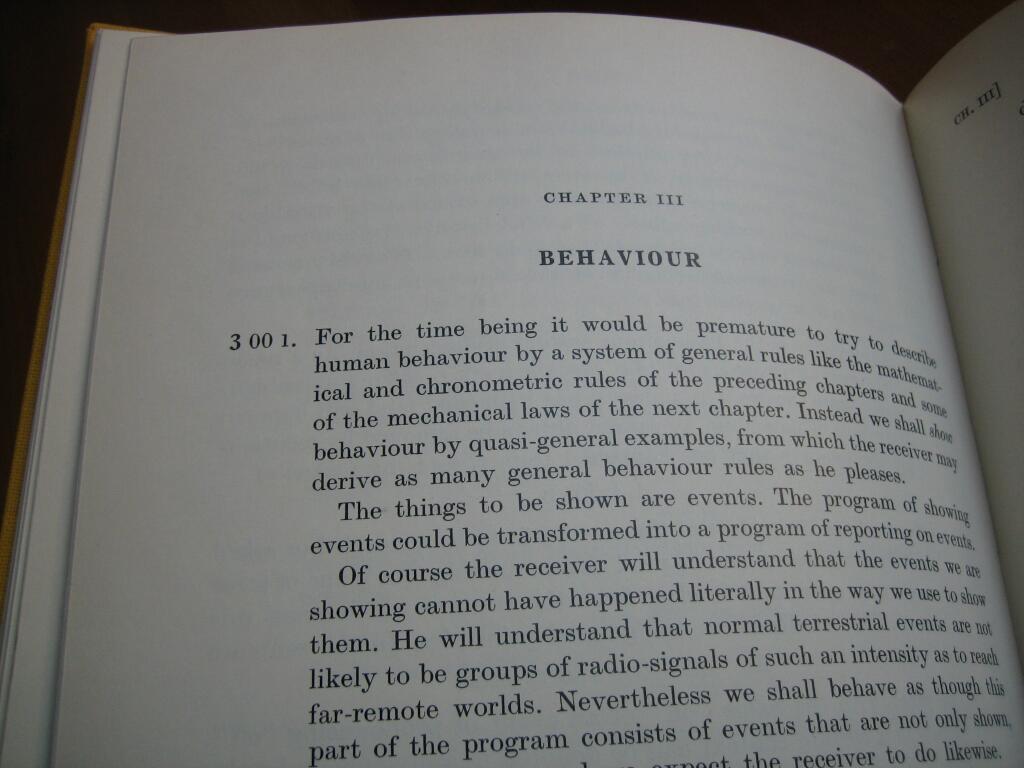 Ha and Hb discuss mathematics, since that’s about the only topic for conversation, but that is arbitrary. In their discussions, they introduce useful ideas such as good and bad (in the sense of constructive versus non-constructive). Now we are getting somewhere.

I was struck by the value Freudenthal was able to get from descriptions of extremely basic conversations, and wondered, what could we communicate through richer interactions? What if we described simulated environments that could actually be evaluated, and played forward or reversed, to see full simulated encounters take place? That was the seed for CosmicOS.

The idea with CosmicOS is to start with math, as Freudenthal did, and then build from there to a basic programming language, and then from there to programs and simulations. CosmicOS compiles down to a series of four arbitrary symbols that could be encoded and transmitted any way we like:

In human-readable form, it looks kind of Lisp-y, since that happened to be the syntax that introduced least complications. CosmicOS is communicated as a long series of definitions and demonstrations:

The initial language isn’t super important, because we quickly bootstrap to any language we want. At the time I was writing this part, I was keen on Java, so I wrote a translator for it, targeting what has to be the least efficient JVM ever written.

Then I wrote a little maze game in Java, shoved it in the message, and promptly dropped the whole project for several years :-). But now I’m back and fiddling with it again, mostly at my son’s goading. I’ve brought the project up-to-date enough to be able to get pull requests. You should contribute! You know you want to.

And just so its clear: I don’t have any particular belief in extraterrestrials or any special reason to be interested in contacting them. It is an interesting puzzle though, figuring out all the different ways we might try to do so. You may also want to check out the recent Archaeology, Anthropology, and Interstellar Communication book.